Low buzzes, screaming babies, pounding beats and soft whispers: sound consists of many different variables. Some even might be the same amount of decibels, but feel louder. How does all that work?

Remember the old days, when we needed to know when a mammoth was coming so we could save our Flintstone-age asses? Ok, maybe that was a while ago, but our bodies haven’t changed too much since those times. Thus, our ears are very very sensitive. And we can identify many different types of sound and noise. As you you might remember from physics class in highschool, sound comes in waves, caused by a vibrating object like vocal chords or a guitar string. The vibrations move the air, that reaches our ears and is transferred into information. Voilá. We hear. But what do we hear?

The sensation of a frequency is what we call ‘pitch’. A high pitch sound refers to a high frequency wave, the low pitches are formed by slower waves. We measure frequency in Hertz (Hz). The human ear is capable of detecting sound waves with a wide range of frequencies, ranging between approximately 20 Hz to 20 000 Hz.

But pitch is not the only quality of sound: it’s also a transmission of energy. The more energy is used, for instance, to stroke a guitar string, the higher the waves. The highness of a wave is called the amplitude, and that is responsible for sound intensity, the volume and distance the sound waves travel. Sound intensity, so the pressure of the moving air, we measure in decibels (dB). As you can read in this cool article, decibels do not work on a linear scale.

Here’s a little list of common sounds and their dB’s:

As you see, a coffee machine and a ringing doorbell might have the same dB’s measured. But hey: they feel different. So, volume and intensity are two qualities of sound – although it is safe to state that the more intense sounds will be perceived to be the loudest sounds. Also the frequency affects our perception: a pumping bass from a stage and a chainsaw may be on the same level, we experience higher, piercing sounds as more annoying than lower buzzes.

But that doesn’t mean lower sounds are safer for our precious little ears. Whether a sound is damaging to the ears depends on the amount of dB’s and the time of exposure. Already the low volume of 85 dB’s can be harmful to your ears. And of course also the frequency plays a role: exposure to the same frequency for a long time damages your ability to hear that frequency. So don’t forget to use hearing protection whenever you can. Better safe, than beeping. 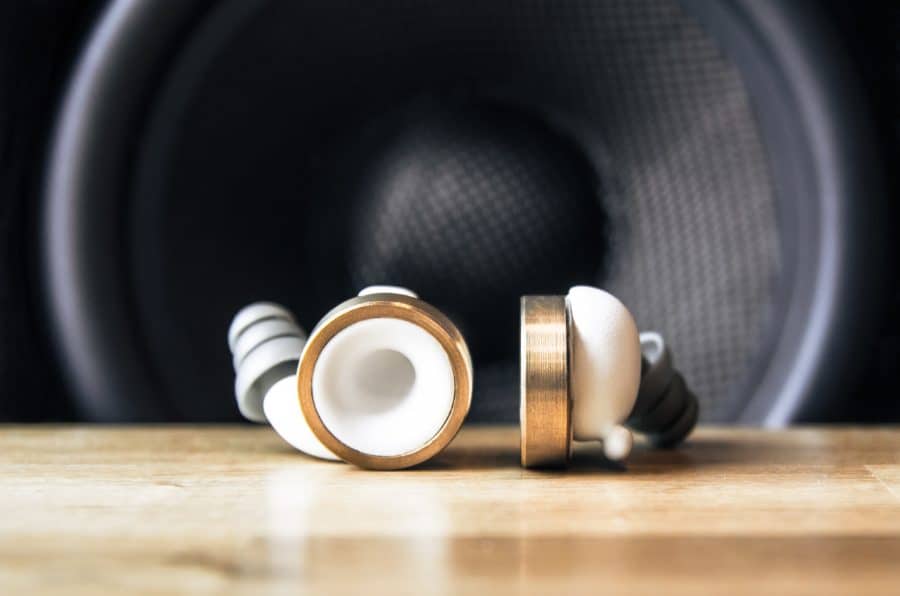 5 bodyguards for your ears

Want to protect your ears? Great idea. What do you need? Total silence or just the worst noises cut off? Of course you do want to look good, so no earmuffs. Let us guide you through the world of earplugs: invisible little bodyguards for your ears. Which one is the one for you? Universal earplugs At the moment these are the most popular earplugs for music and public occasions, and are available at many music venues nowadays. These usually have special music filters, or -the more pricey ones- changeable protective filters. Their mushroom-shaped layers totally shuts off the auditory canal,